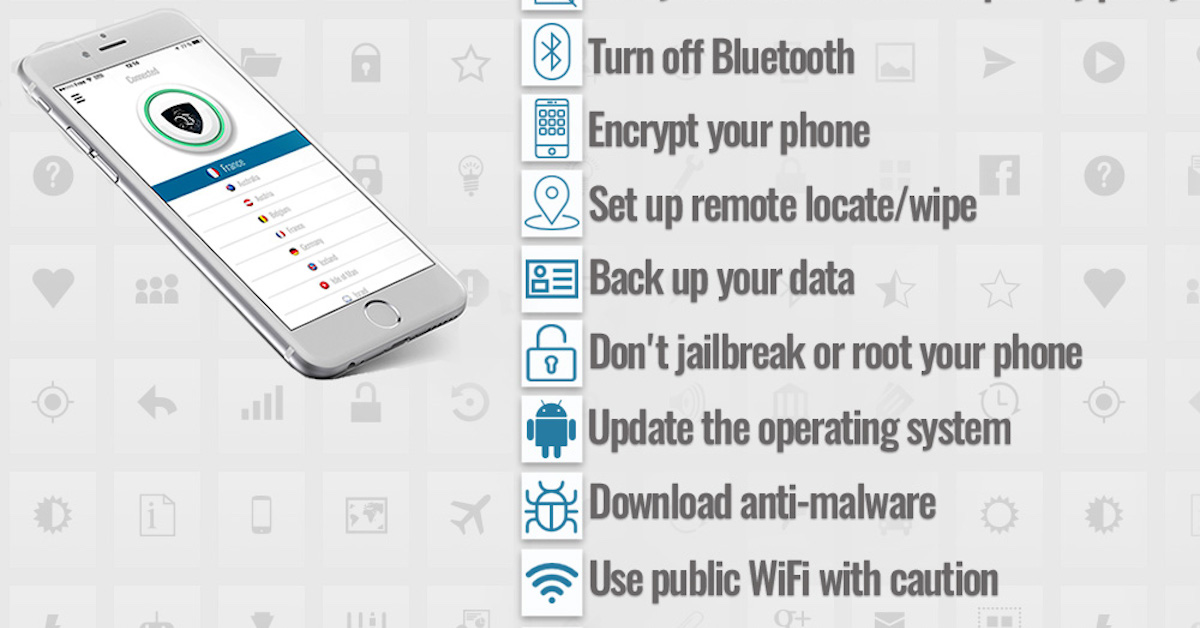 Security is important when using mobile devices, especially when connecting to the Internet. Read on to find out what you need to know.

Believe it or not there are security risks when using a mobile device. I know, it’s surprising right, that your phone or tablet could be a possible threat to your safety. When you consider all the potential threats that exists on the Internet, and the fact that most of today’s mobile devices are connecting to and through the Internet with every function, I think it becomes easier to understand just how vulnerable they are. While many of the threats are the same as those faced by the average laptop or desktop user there are some unique to the mobile world. There are four basic types of threats mobile devices are susceptible to. Mobile phone security threats include application based, web based, network based and physical threats. 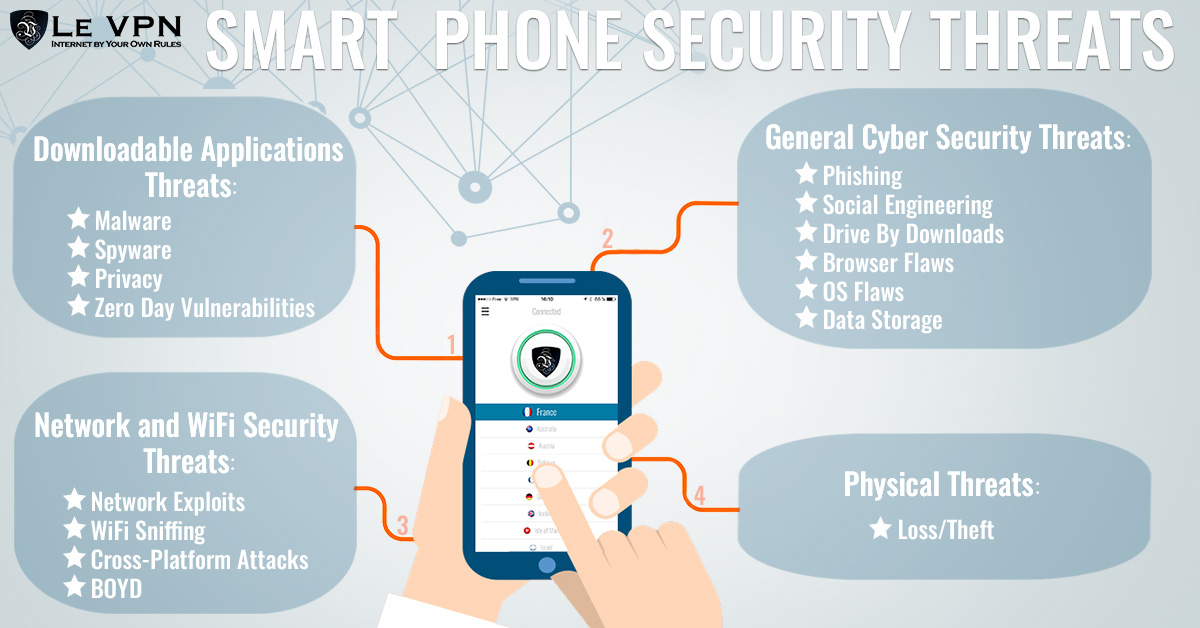 Downloadable applications pose the most common risk for mobile users; most devices don’t do much on their own, it’s the applications that make them so awesome and we all download apps. When it comes to apps the risks run from bugs and basic security risks on the low end of the scale all the way through malicious apps with no other purpose to commit cyber crime.

Due to the nature of mobile use, the fact that we have our devices with us everywhere we go and are connecting to the Internet while doing so, they face a number of unique web-based threats as well as the run-of-the-mill threats of general Internet use.

Mobile devices typically support a minimum of three network capabilities making them three-times vulnerable to network based attack. The networks often found on a mobile include cellular, WiFi and Bluetooth.

Unlike a desktop sitting at your workstation, or even a laptop in your bag, a mobile device is subject to a number of everyday physical threats. 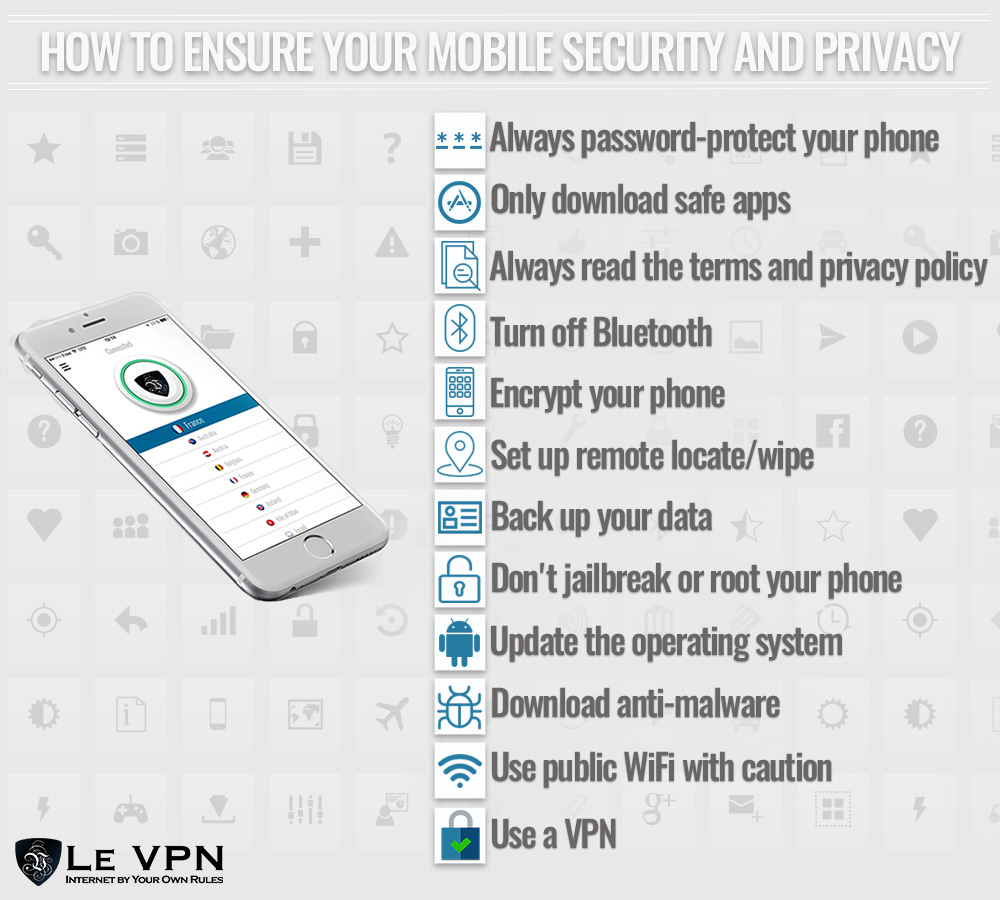 Despite all these issues the number one threat to mobile security remains us, the users. To begin with, we are less likely to keep our operating systems up to date, which means we are not taking advantage of the latest security advancements. According to Symantec more than half of mobile users have no idea that security features even exist for mobile devices which is another big problem. Add to that the sharing and social nature of the Millennial generation and the opportunities for fraud and crime expand exponentially. As mobile devices improve and our use of them grows the number, types and quality of threat will grow too. Here are some tips on how to ensure your mobile security.

Challenges of Mobile VPN Use and the Best VPN Apps

VPNs are not new technology but have only recently been made available to the mobile market. These connections provide the highest level of security, privacy and anonymity available on the Internet today. While relatively easy to deploy on stationary devices such as desktops, routers or laptops that tend to sit in one place while connected, VPN is much more difficult to manually deploy on mobiles. Mobile devices are subject to rapid and frequent change in mode of connectivity and IP address as they move through real time, a mobile VPN must be able to adapt to that while maintaining integrity of connection.

The best VPN solution for your mobile security is installing and using a VPN app from a reliable and trustworthy VPN provider like Le VPN iPhone app. This VPN app allows you to encrypt and secure the connection of your mobile device with one single tap and no manual installation is required. You can easily pick any country that you wish to connect to and to save your favorite countries in the Favorites menu, or reconnect to your recent connections.

There are many benefits of VPN for your cell phone. They ensure a safe, secure and authenticated connection at all times and will alert you if the connection fails. This way you can guarantee your WiFi security in public hotspots ad be assured that no one is watching while you do your banking, pay a bill or check your baby monitor. In addition to this, your data and information is encrypted before leaving your device so that if it is intercepted for whatever reason, whoever finds it won’t be able to do anything it with it. Additionally, by connecting to a VPN network your IP address will always be masked which means that your phone could not be tracked or traced by malware or hackers.

Side benefits of using the VPN center around the fact your IP address is masked. The VPN network works because of dedicated VPN servers located around the world, each VPN provider has their own. When you log onto the network you choose a server located in a country of your choice and when connected you are given an IP address by that server, from the country in which it is located. This allows for things like unlocking geo-restricted content like US or UK television.

Le VPN is the leading provider of VPN for mobile and has solutions for both Android and iOS. The software can be downloaded directly to your phone and operated with the touch of a finger. Le VPN supports different protocols with varying level of securities intended for different purposes, including IKEv2, OpenVPN, L2TP over IPSec and PPTP. Once downloaded all you have to do is open the app, enter your user name/password, choose a server to connect to and the connection is made. A single account is good for multiple devices with 2 open connections at any one time and no limitations on bandwidth. The best part is that the service is very inexpensive at less than $5 per month.

Without doubt, mobile devices are here to stay. They are only going to get more complex with time and over time we will come to rely on them more and more. As the technology advances, so too will the threats. There will always be risk of vulnerabilities, so it is only right as a mobile user to take advantage of the latest cutting edge technology to protect yourself and that is Le VPN for mobile. Get Le VPN now and take its protection with you everywhere you go.