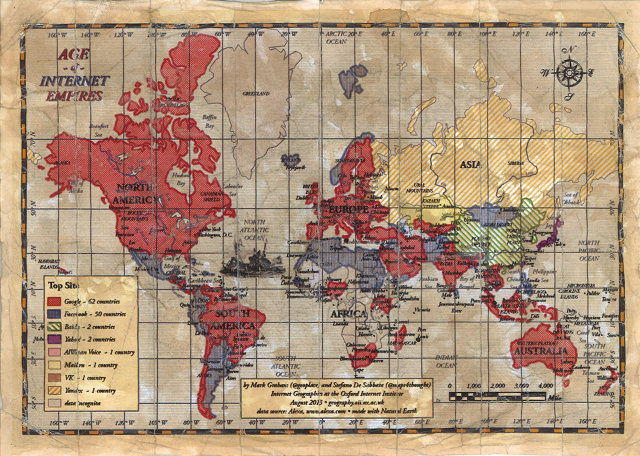 The world map of most visited sites

The Internet is vast, there are millions of websites, the battle for ranking is huge. Who are the winners and losers, which are the world’s most visited websites.

The Internet’s Most Visited Websites

The Internet is vast. It is made up of tens of millions of devices, millions of websites and servers and of course, all of us. They, the people who do such things, have tried to estimate the number of websites on the Internet but it is hard. The average age of a website is only a few months, websites disappear and new websites are created every day so keeping an accurate count is virtually impossible. Perhaps the Ghost In The Machine can tell us. In any event the quest to be number 1, the battle for the highest ranking and the most visibility, is what drives these websites, most of them anyway.

Knowing which is the best, which one is the most visited, is also a loaded question. For one thing, it completely depends on most visited by whom, or most visited in which geographic region, or do you mean in general, which one is the most visited in the world? The answer to each question is different, for different reasons, and comes down to 1 thing: the Internet is not as free as you might think. The Internet is censored, monitored, blocked, restricted and declared forbidden to varying degrees from place to place around the world. What is accessible for you may not be accessible by someone else, and if you live in one of the worst places for Internet censorship you may not even be able to access what the rest of the world knows as the Internet at large.

The good news for Internet users wondering how to unblock websites that are blocked, of hiding your IP address and maintain anonymous Internet use so that you can avoid censors, evade restrictions and gain access to all the best the web has to offer is that there is a solution, and it’s a good one. What I’m talking about is a fast VPN. VPNs are a form of Internet security that comes with an added benefit; anonymous IP addresses, complete privacy on the Internet and the unintended consequence of slipping right past geo-restrictions and other Internet blockages.

Anonymous VPN service works like this: you download the VPN software to your computer, when you log onto the Internet you do it using one of the dedicated VPN servers (bypasses your ISP servers and Geo-tagging), your connection is encrypted (the software you downloaded) and goes direct to the end-point destination (bypassing censorship). What you end up with is a totally secure connection that is nearly impossible to detect, routed through a server of your choice (choose a server located in the UK to watch UK TV, the US for US TV etc) and encrypted so that if it is intercepted, no one will ever be able to read or use it.

So, back to question at hand, which is the world’s most visited website? To be honest, I don’t think anyone really knows but there are a couple of websites that like to try and track it, and keep a tally of which is top. The two most notable are Alexa and SimilarWeb. Alexa is a wholly owned subsidiary of Amazon.com, no conflict of interest there, and is a California based web analytics company. SimilarWeb Inc. is a UK based independent digital analytics company.

Alexa works by tracking the traffic of users who have installed its toolbar, which is also the basis of much of the criticism of the company’s rankings. Since the company only tracks users who have installed Alexa the data pool is very limited. SimilarWeb Inc uses big data technology to gather information about the web, websites and its users. Big data is data sets that are so complex that more traditional methods of analytics are useless. Basically, big data analytics extracts information from an unlimited and never ending data set… all the web traffic on the Internet it can get its hands on.

Needless to say there are some pretty big discrepancies between the two rankings. Within the top five, the first three are the same but ranked in completely different order. The number four spot on each list are also very different; #4 on the Alexa side is #16 on the SimilarWeb list, the #4 spot on the SimilarWeb list is ranked #21 by Alexa. The only thing they have in common is the #5 spot, Yahoo.com. Moving down the list the differences only get bigger.

The Top Ten (or Eleven) Websites On The Internet

Blending the two rankings together yields a top 5 list with 6 names on it; Google.com, Youtube.com, Facebook.com, Baidu.com, Yahoo.com and VK.com. A quick analysis of the list reveals a quick snapshot of what the average Internet user is doing; search, streaming video and social media. The three top censored items on the Internet around the world.

Through public service data about Internet traffic provided by Alexa the Oxford Internet Institute’s Information Geographies blog has developed a map of the most popular websites by country. This little globe of old colonial style shows that Google and Facebook dominate the global Internet, however, it reveals some interesting exceptions on a region to region basis. Even in today’s global world there are still unexplored territories: Alexa lacks information on countries with small populations using the Internet, for example in Africa sub-Saharan, and where traffic is blocked. 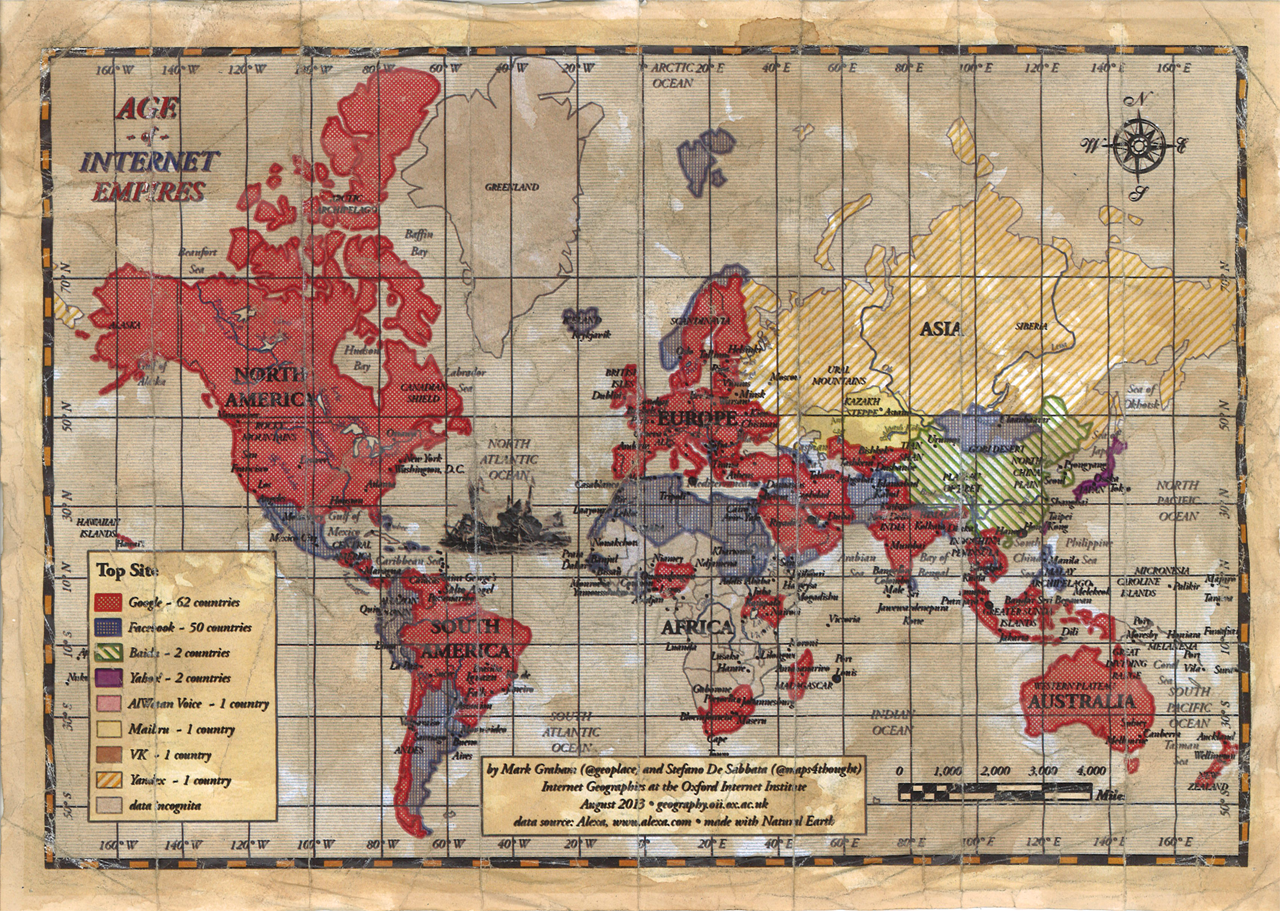 In the Palestinian territories where the Internet is heavily censored the al-Watan voice newspaper is the most visited site. Yahoo! still has some entrenched camps in Japan and Taiwan while other search engines have prominence elsewhere. In Russia, the search engine Yandex dominates the digital arena.

In China, as mentioned earlier, the search engine Baidu is the most popular site in the country. The caveat is that its record can be partially attributed to the government. Chinese officials have acted to limit the market share of Google and other outside influences to promote Baidu and other local businesses. To date, Baidu controls around 80 % of the Chinese search market. According to Alexa data, it has also recently become the market leader in South Korea.

If you want to visit one of these top sites and are having trouble accessing them, or need to avoid unwanted prying eyes, a VPN is the only solution. Use a VPN service to encrypt your communication and data transfer on the Internet, whether you surf from your computer or your mobile phone or tablet. This way, no one can analyze your browsing information, target you for geo-tracking or block you from accessing their content. With a VPN, you can easily change your IP address by selecting a hosting country between several servers worldwide in order to gain access to websites in any country. The best part is that Le VPN technology allows you to hide both your personal information and your country while you do it, protecting you and your devices from tracking, malware and hack attacks. Honestly, if you use the Internet for anything at all you will benefit from VPN technology so why wait, get Le VPN now.