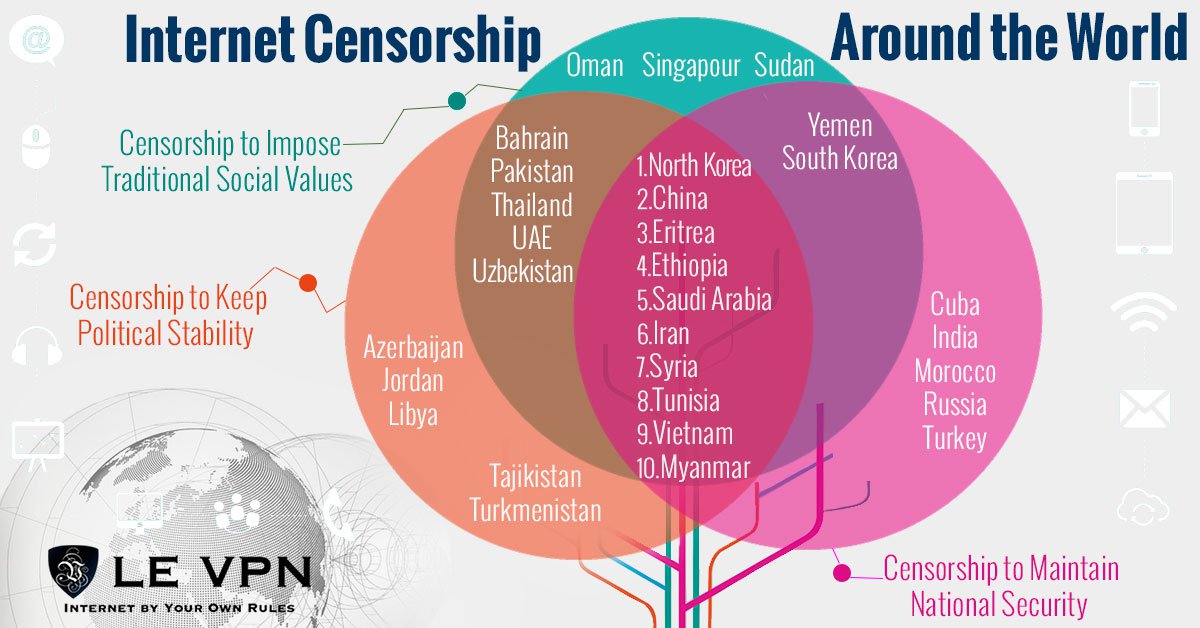 Internet censorship in the world

Nowadays, we tend to take Internet for granted, especially in developed countries.We can hardly imagine our lives without access to the web, everywhere and somewhat immediately. However, the situation is not the same in many parts of the world with pervasive censorship in many countries, mainly to limit the freedom of access to information.

We can thus mention the case of blocked site supposed to give access to illegal downloading , censorship of political news and social networking sites: censorship is a real problem that affects people in many countries.

So let’s see what is Internet censorship and how it works?

Not only are there a diverse range of reasons for censorship, but there are also a variety of censorship methods that have been used around the world. Let’s dive into several examples that illuminate the complexity, variety and difficulty of using technical methods to censor the Internet.

China has become a model for a number of other countries, even exporting cyber surveillance technology to countries including Cuba, Zimbabwe and Belarus. The “Great Firewall of China,” as this system of censorship is commonly known, has evolved into a highly advanced, precise machine that can block entire sites, individual pages and even specific search results on the fly, as news events and changes in the political climate unfold.

A standard feature of most routers, blocking IP addresses is the most basic and easiest to implement technique.

But some methods are more advanced. Indeed, the most sophisticated method, keyword filtering uses Intrusion Detection Systems (IDS) to inspect all traffic passing through, likely at edge routers deployed by major ISPs that handle much of China’s incoming and outgoing traffic. If the traffic contains any matches with a blacklist of pre-defined keywords, the traffic is suppressed with a TCP connection reset. TCP reset packets are sent to both endpoints to force the connection to close, and the connection is blocked for up to an hour.

Brazil has other methods ; i.e. blocking IPs. In December 2015, WhatsApp refused to provide information for a criminal investigation in Brazil. As punishment, a judge in Brazil ordered a 48-hour blackout of the single most used app in Brazil with about 93 million users, or about 93% of the country’s Internet population.

But sometimes a simple IP block isn’t enough. When Twitter was banned in Turkey, the government had to escalate its censorship techniques in order to keep Internet-savvy citizens from accessing the service.

Other methods can have big impacts : Pakistan chose to block Youtube using the more convoluted and less common, latter method. Pakistan’s ISPs introduced a /24 routing table entry for YouTube’s IP address space and began advertising a route with a more specific prefix than the one used by YouTube. Because most routers prefer routes to more specific prefixes, this method redirected YouTube-bound traffic to a black hole.

But some developed countries also have some approaches : ISPs in the UK began to engage in deep packet inspection, blocking URLs with obscene content, but in 2008 the practice led to unintended consequences for Wikipedia users in the country…

Interesting to see that censorship technologies deployed within the country are more advanced, harder to circumvent and potentially more far-reaching than even countries with repressive regimes. On the other hand, also Torrent sites are being limited in many parts of Europe, North America or Asia …

Looking for a VPN to bypass internet censorship?

To avoid Internet censorship, use a VPN service that allows you to choose your country connection. Wherever you live, you can choose to set your connection in one of 114 countries where access is not restricted. You can then access to the sites of your choice with full anonymity, without incurring the censure or heavy reprisals from any censorship. You will also be able to access to your favorite P2P and streaming sites. You shall bypass geographic restrictions and view sites which are blocked by specific countries. You can download all the content you want and surf without restrictions. This is the best way to avoid Internet censorship!