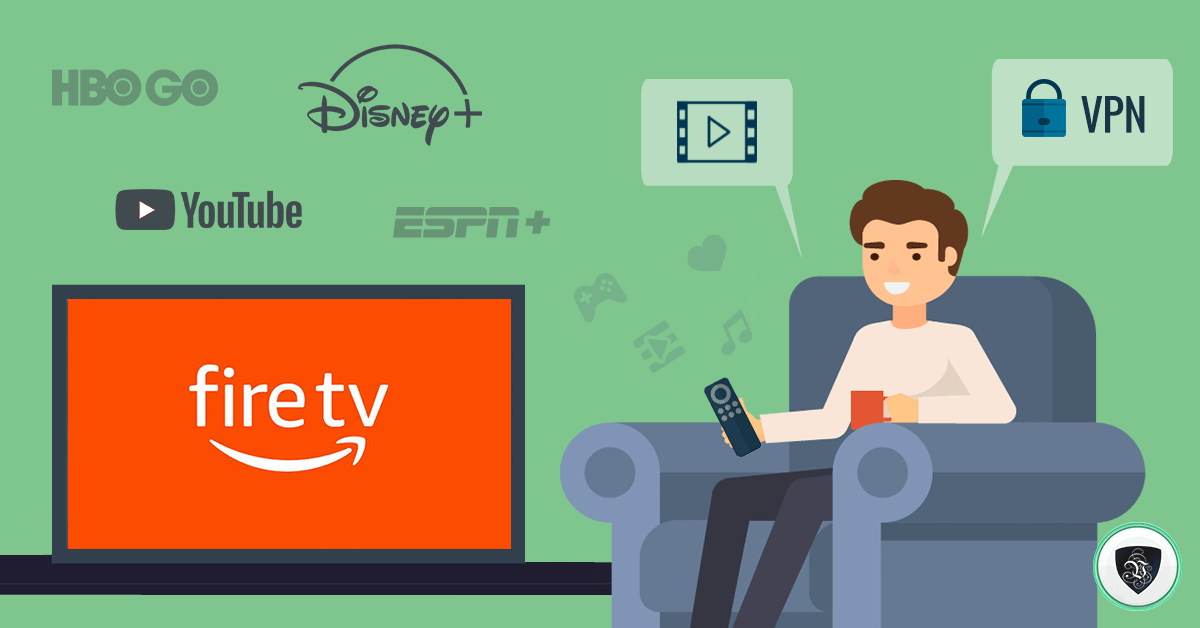 Amazon Firestick and Fire Cube, as well as the Fire TV app that comes with it, is a fantastic invention. It can completely replace both our regular cable and have multiple other apps.

The downside of using this smart TV platform is that it will act very similar to a smartphone. This poses some concerns when it comes to geo-restrictions and data collection.

But, by using a VPN for Firestick, you will be protected. And, by using premium VPN providers like Le VPN, you will get lag-less speeds for dozens upon dozens of channels, globally. This is a VPN app specifically made for Fire TV, and it works seamlessly with the platform.

It is not as easy as clicking a button, as you don’t even need to click. You can switch subscriptions like TV channels by simply telling your Amazon Fire TV remote to change to another app. This remote works with all Amazon Fire TV devices, such as the Firestick and the Fire Cube.

What is the Amazon Firestick?

While everyone understands that the Fire Stick is Amazon’s 2019 answer to Apple TV or Roku, it is also a counter to many smart TV manufacturers. Unlike companies like Apple, or Samsung, which make their platforms both subscription-based and restrictive, the Firestick is simply a piece of hardware with its OS.

The Amazon Fire TV Stick uses the TV’s own graphics processing and only transfers the signal through the HDMI. By plugging it in and selecting the right spot as the source, you will have an instant smart TV, even if you have an older television set.

The technical specifications for the Firestick are made for streaming up to 60Hz in 1080p, or FullHD quickly. While there are modern TVs that work on a higher resolution, this will suit most users and guarantee fast streaming.

The specs for the new Firestick are:

With a specialized premium Firestick VPN, the speed provided by any server would be more than sufficient to remove any lag or buffering. Even if you are using multiple devices to live-tweet while you binge your favorite show, you will still have enough bandwidth on all of them.

Here, Le VPN has used its extensive experience in making the fastest VPN apps for various systems. The app for Fire TV is intuitive and works in the same way as it would on your smartphone or tablet.

You don’t need to learn how to install a VPN on Firestick, as the Le VPN app can be found with a simple corner search and installed from the Amazon App Store on the Fire TV device.

Also, you can install your VPN before you start browsing by using your smartphone or PC, directly from Amazon online.

Additionally, you won’t need to set up a SmartDNS such as with an Apple TV or some other smart TV manufacturer. The VPN app works seamlessly, without any further adjustments. Once installed, you can simply select a server and go.

The product provided by Amazon might be a breath of fresh air for consumers, but it wasn’t so for many companies. Both Google and Disney had their reservations about joining their products on the Amazon market.

Thankfully, nobody decided to stay left out of the game, and users can now download both YouTube and Disney Plus for their streaming pleasure. On Disney Plus, you can catch up with Star Wars The Mandalorian, following Pedro Pascal (Narcos) in the title role, with baby Yoda at his side.

On HBO, there are both The Watchman, based on Alan Moore’s cult-classic comic book, and His Dark Materials, adapted from Philip Pullman’s magnum opus. Not only is this adaptation based on a subjectively better source material than GoT, but also a finished one. Hopefully, this will save us from the last fiasco.

Finally, the Firestick includes a wide range of free apps that will satisfy even the most demanding TV addict. From full ad-based networks to specialized science and art programs, all you can find inside this easy app.

Some of the free apps available for Fire TV are:

Advantages of VPN for Fire TV

The best VPN app is the one that was made directly for the Fire TV platform. Here, your IP address will be masked as it would be on your phone or tablet. The new IP would be the same as the VPN server you are connecting through, protecting your own device with an encryption tunnel.

This alone can have a set of cool benefits as you will be able to unlock geo-restricted content. For instance, if you want to follow your hometown’s college football team, you will need to move to the closest VPN service server, and it will probably be available.

Other apps will also change their settings, depending on your IP. To get free VPN access to recommended Italian music on YouTube, you simply need to change the VPN server location to anywhere in Italy.

By combining an ingenious platform such as the Amazon Fire TV with premium VPN providers like Le VPN, you can reap the benefits of both, as well as the combination.

The Fire TV will provide you with a platform where to watch all your shows and movies, and the VPN connection will give you wider access and security. Together, they make the best TV watching experience to date.