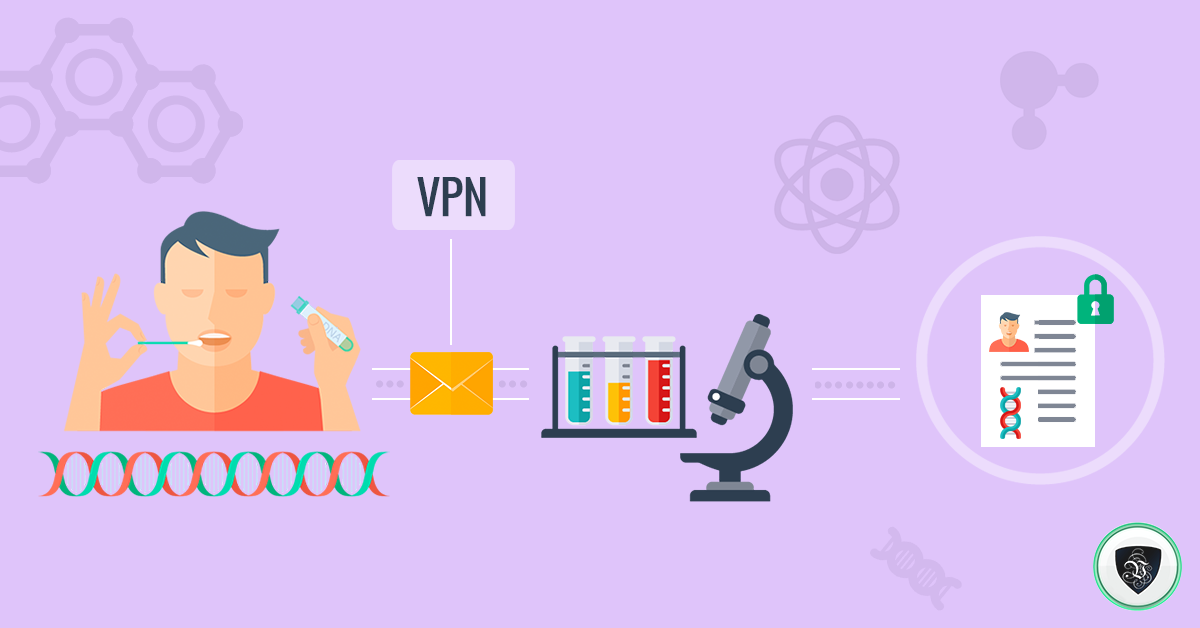 When talking about consumer DNA tests, or heritage tests, we often run straight to conspiracy theories about cloning and tube babies. In reality, our online privacy is a much more immediate concern than some Palpatinesque sinister plan to take over the world and/or galaxy.

At some point, it may become a severe privacy concern if someone keeps your entire DNA on file. It is much more concerning if the address you have sent the DNA kit from, or the IP address where you receive the results, are kept in a database.

Thankfully, if we are willing to hide all other data apart from our DNA results, we can be safe even with someone knowing our full biological ancestry.

With premium VPN providers like Le VPN, you can hide your IP address and private information. Your sending address can be hidden by simply mailing the kit from some distance and not your home directly.

Those of us who spend too much time on the internet might find some interesting tidbits of information on how DNA tests are used for purposes from cloning, to growing organs, to preparing genetically modified babies. Regretfully, that sort of technology is still far away.

Additionally, DNA tests from swabs are not as reliable as full blood works and will not use your entire genome to analyze your ancestry. What is being looked for are specific markers that have been found in other people around the world.

Those residing in Europe or Africa will notice their results being somewhat ‘’US-centric’’. Telling an average Gambian that they are black or an average Pole that they are white is utterly meaningless, and just a waste of good money.

The results of the DNA test are usually insufficient to find even your ancestry, as all modern humans share mixed ancestry. The sample you are sending is not an issue. How you are sending and receiving information is.

Companies collecting the DNA are usually focused on safeguarding the DNA data, but not the digital data coming with it.

Very few people might bank on the information that you are 2.2% Native American. A lot of people would like to find out your IP address and banking information. Without proper encryption, while using the internet to access the data, you might create privacy risks.

If you know how to use a VPN, it will be easy to fill out an application without exposing yourself. Keep the data you provide vague, and without exact data on any point.

Additionally, once the DNA kit arrives, please don’t send it from your address. If you travel for work, send it from a downtown post office without private data on the return address.

Keep all of the data you provide to a minimum, and the rest as vague as you can to make the test work.

Those knowledgeable about cybersecurity are aware that any unprotected contact with a compromised entity online may lead to complications. If you don’t have a VPN, you may have issues with some of your data being stolen, if the other side is already hacked.

Additionally, you may want to use an anonymous email to receive your DNA results. This way, you will protect yourself from anyone who may have hacked the DNA lab to collect your email.

By using your primary email, a hacker may trick you with some sort of phishing, as they already have a trusted address with the laboratory.

Most online privacy risks don’t come from a single source or a sole mistake. In many cases, hackers, spyware, and unscrupulous companies will collect your data for years. Only once there is enough information to profit, they will fall into action.

What making an exposing move such as sending your DNA to someone, you will want to allow as little data to pass through as possible.

Especially if you are using your smartphone or a similar device that holds a lot of personal info, you will want the best mobile security app available to protect your devices.

Unlike most actions that happen on the internet, there are not a lot of political risks connected with DNA testing.

Certain people believed that there might be some issues with people separating on ethnic and national lines. But, DNA testing proved the opposite for many. Globally, most people are of mixed ethnicities and heritages.

By some calculations, all humans on this planet might be inside 50 steps of kinship. And, while there are some traces of other races in some populations, the rest are simply phenotypes. All people are more than 90% Homo Sapiens Sapeintis in all cases.

We should be aware that most of the risks proposed with DNA tests are in the realm of science fiction. Cloning, designer babies, and similar exhibitions might be in our future but are still very hard to do from a spit swab.

At some point in the future, you might be voting to install a Great Chancellor of the Terran Republic that will do these things from the shadows, but that day is not coming soon.

DNA tests might be a risk for privacy, but not in the way most people think. Your online privacy is a much more realistic risk than someone cloning you.

Thankfully, with a premium VPN provider like Le VPN and a few other tricks, you can protect yourself from anyone stealing the identity you already have.