Why French TV channels censor their content on the Internet 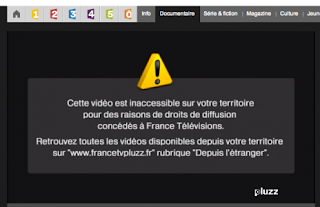 Most major national television channels such as the BBC, RAI, etc… have their programs available on the Internet worldwide. The French TV channels are an exception, since a law was passed in the 90s.

In France, a country that aims at advocating for human rights, all French TV channels operate a daily censorship of their content on the web. This usually goes unnoticed, as it does not affect broadcasts on cable TV or even in France, but for many catch up programs on the Internet. These catch up sites, set up by the TV channels themselves are a huge step forward for those who have no access to cable or satellite TV.

When they are abroad, francophone users are thus denied of information or cultural content channels. It is a paradox, given the fact that this country has a Ministry of Francophonie to effectively disseminate the French culture and language. New technologies are yet a great way to spread this culture throughout the world and at lower cost.

When you connect to catch up the French TV channels from abroad, the programs available are listed but unfortunately unavailable for viewing. The only thing that you can see is:

“The content you requested is not available in your territory.”

The government has been asked repeatedly about this at the National Assembly and the Senate and the response corresponds to the above message you see sometimes appear in place of the video. You are then been explained that this is due to the producers themselves who are against it. Meanwhile the English, Dutch, Italian producers, to name a few, do transmit their programs all over the world.

In fact, since the 90s, the French television is carried out by private production companies and the law allows them to determine the modes of distribution. In certain circumstances, the TV channels are forced to renegotiate the rights to broadcast on the Internet and agree not to distribute in given geographical areas.

A producer can decide to sell the program in other countries and exploit its production export. This is actually a good idea to disseminate the French culture and to develop its economy. And this justifies the online presence of the same content on a French website can compete with local distributors, which does not have the advantage to negotiate broadcast rights.

However, in most cases, transmission is blocked when it is not even otherwise exploited in the country. In fact, French exports represent less than 3% of the annual investment for producers. Thus, the producer cut a potential audience, hoping to reach a particular market without actually doing it.

To watch all the channels you want, go for a VPN service that allows you to connect from the IP address of your country. If you are a French citizen living abroad, thanks to Le VPN, you can select a French IP address and you can, without any trouble, connect to the media site of your choice and watch all the content you want.

Le VPN provides you the opportunity to select an IP address from different countries. You can have fun and watch your favorite TV channels or your radio stations anywhere in the world! You can also find the latest U.S. or British series, without having to wait, sometimes for a very long time, that they are broadcast in your country.