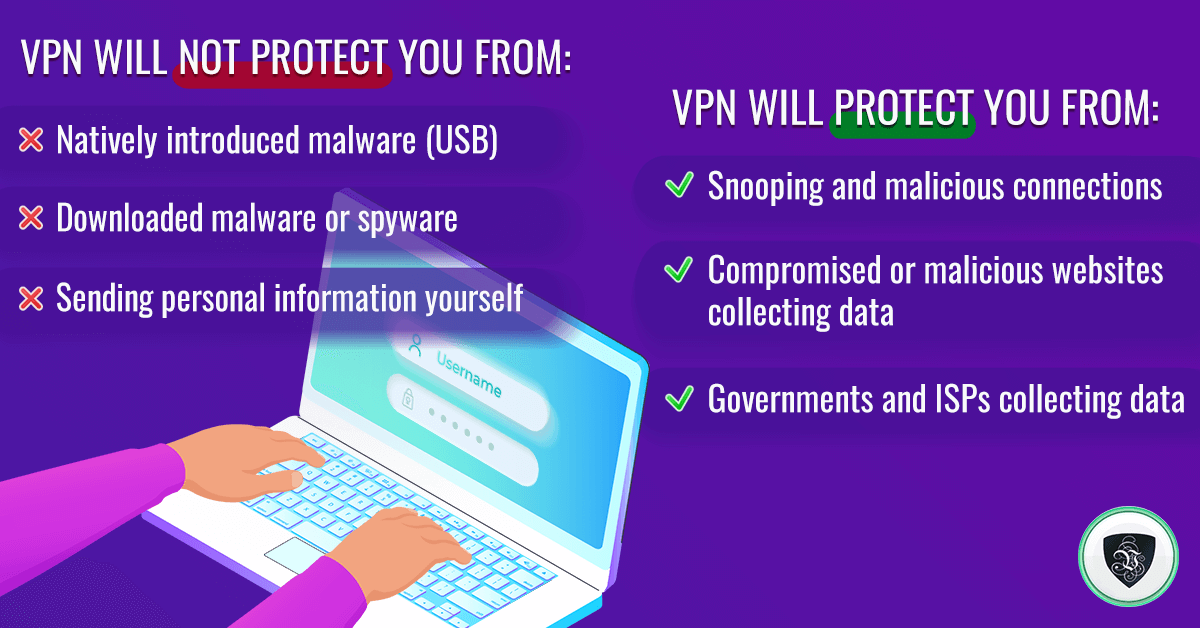 Can You Get Hacked Using a VPN?

Yes. While a VPN will protect your connection to the internet from being spied on and compromised, you can still get hacked when using a VPN if you bring the malware in yourself or allow someone to find out your username and password.

If you are using a premium service like Le VPN, you will never be hacked because of your VPN. But, that doesn’t make you immune to any attack. Even with the military-grade encryption on the connection, the same encryption doesn’t apply to people. And people are the main thing usually hacked.

Thus, a VPN will protect you from:

But, a VPN will NOT protect you from:

You will be safer when using a VPN, but an idea of how to use a VPN and where will make it more effective.

Who Can Hack You?

Although we always imagine hackers as some post-punk-rock wizards dwelling in LED-lit hangars, that is not who will hack you. First of all, those people you imagined in the first place already have a job in app development.

The people who are most likely to hack you are your friends, family, and especially your partner.

Why? Because they have your personal information and can extrapolate the rest.

Anyone else who would gain such info would have the same advantage. And, unlike your spouse, they don’t live off the same household budget. Anyone you give that information, for whatever reason, is a risk to your cybersecurity.

That is why smart home security begins with increased anonymity. And a good VPN and good cyber hygiene are the cornerstones of that anonymity.

Using dubious apps, downloading suspicious software, or simply clicking on links from your favorite Facebook groups, all willy-nilly is the best way to get hacked.

A VPN and anti-virus will usually detect software that is latching onto core systems as malicious. But, if a piece of malware asks you directly for access, that wouldn’t be called a hack, but a feature.

Additionally, it doesn’t need to be malware. Instagram, and its parent company Facebook, were allegedly spying on users through iPhone cameras even when not in use. And we all tapped ‘’I Agree’’ on that one.

What a VPN Does Protect from?

A VPN will protect from a wide range of risks. Additionally, these would be hard to defend from on your own. Even other cybersecurity software like an anti-virus won’t be able to help.

Primarily, these are so-called malicious connections. If you are connecting from a café or bar with your phone or laptop, you never know when the connection will be spoofed by someone on the side.

Using a VPN for Mac or iPhone, in this case, is the safest thing to do. That way, you won’t be giving anyone your data as you are browsing. This also goes for Internet Service Providers (ISP) that are overstepping their bounds.

And some websites collect data as well. This can range from niche sites to giants, and you always want to know that your information is safe.

Generally, this would be most frequent when it comes to public WiFi. But, there have been cases of a breach in security for hotels and restaurant chains where such things have happened.

In the current day and age, this is every major and most minor website. A compromised website will use cookies and similar data to track and survey your behavior.

Often, they will collect even personal information and location data if possible.

ISPs will often supervise their users for illegal actions. But, even those who have done nothing illegal can have their data collected and sold to marketers.

Also, what constitutes an ‘illegal website will depend on the government. In the age of deceit, telling the truth is a revolutionary act.

What a VPN Won’t Protect from?

Basically, a VPN won’t protect you from yourself. And, honestly, you would never want software with such ability.

Even if you have the best VPN for Windows on your home computer, it won’t stop a virus from a USB, or the one you have downloaded against your better judgment. Also, it won’t help if you send your private information via a message directly.

Native malware is any type of malicious software already on your device.

Regardless if you have downloaded it from the internet directly, brought it in on a USB or disc, or developed it yourself, it is there via human error.

Clicking on virus links or being a victim of phishing via email or social media won’t be protected by your VPN.

Recently, there was a Netflix phishing email scam going on, which fooled many experienced users.

Nothing will stop someone from accessing your bank account or social media if they have your username and password. Anything short of biometric security here doesn’t help.

So, using cyber hygiene and not sharing private information with anyone is paramount.

While a VPN is, without a doubt, a cornerstone of your cybersecurity, it is not everything.

Premium providers like Le VPN will protect your connection and devices from outside threats. But, they can’t save you from something you download willingly, or from your behavior online. That stuff requires a bit of discipline.