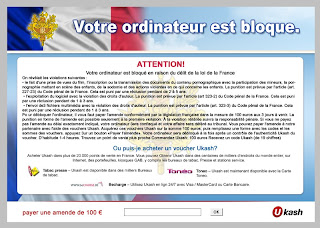 Europol, European union police, has announced the dismantling of a gang of criminals. Its members are accused of having infected hundreds of thousands of computers via a ransonmware, i.e. such type of malicious program that locks the user’s files in exchange for the payment of a ransom. For payment, criminals do pose as police officers. On the infected computer is displayed a message informing the user that he/she was guilty of illegal activity and has to pay a fine.

Indeed, end of 2011, French Internet users have had their computer compromised by malicious advertising broadcast on streaming sites. Once the malicious code executed, a warning appeared on the screen with the logo stolen from the French police and requesting the payment of a 200 euros fine.

Although it is difficult to evaluate the exact number of victims, Europol estimates that hundreds of thousands of Europeans have been affected by this criminal group’s activities. Considering a fine of 100 euros on average, such pirates have collected several million euros.

According to Reuters, the alleged leader of the gang is a Russian man of 27 years old, who was arrested last December in the UAE. Ten other alleged members, all from Eastern Europe (six Russian, two Ukrainian and two Georgian people) of the organization were arrested last week by the Spanish authorities.

During the arrest of the gang, nearly 200 credit cards (used to withdraw the money from victims via online payment services such as Ukash and MoneyPak) and about 26,000 euros in cash were seized by the Spanish police.

An information site on the subject of ransomware www.stopransomware.com has recently opened. Still, the best advice is not to pay but to protect your computer. First install a good anti-virus software. And if you want your Internet connection to be secure and anonymous, choose a VPN. A VPN service encrypts your Internet connections and keeps secret the sites that you have visited and the information you have left on these sites. This protects all your Internet activities with a secure VPN virtual tunnel, which includes a extremely strong military encryption. Indeed, all traffic through the VPN uses AES-256 to encrypt data. AES stands for “Advanced Coding Standards” – a symmetric encryption standard adopted by the U.S. government. It has a fixed block length of 128 bits, with key lengths of 256 bits. The AES figure has been extensively tested and analyzed. It is now used worldwide.

Therefore, any connection or pirate decryption of data through the VPN tunnel is strictly impossible.