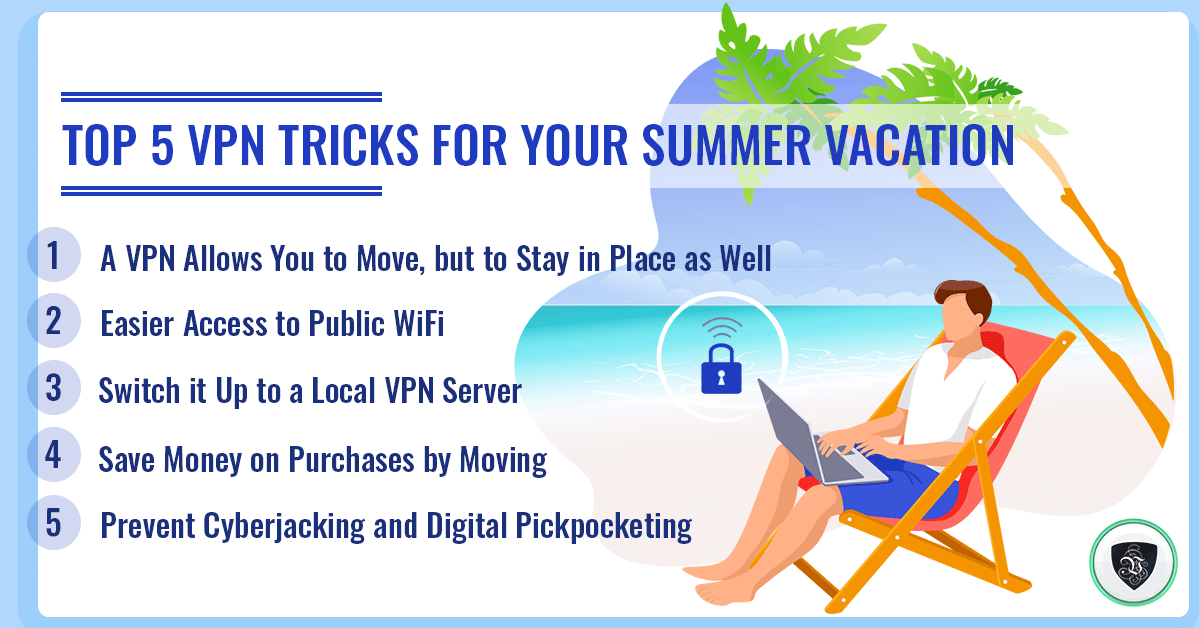 In the words of a Scottish revolutionary William Wallace: Freedom! After more than a year of being cooped up in our homes and cities, we now have the chance to go wild in a remote location. But, a perspective summer blast has some risks, and you will need to use some VPN tricks if you don’t want to return home to your identity being stolen.

There are three main reasons why everyone should use a VPN when vacationing:

And, while you might think that you are safe because you are not an international spy but just a regular person – that is precisely the data everyone wants right now. Remember that a few grand you have on your savings can be the annual income somewhere.

Thankfully, by knowing what is a VPN and how to use it, you will know the easiest way to protect yourself. With premium VPN providers like Le VPN, you can have security on all of your mobile devices and carry it around wherever you are and go.

Why Do You Need a VPN on Vacation?

Even if you are tech-savvy, there is always the issue that the primary cybersecurity that you have at home is not readily moved to your summer destination. So, it would be best if you created a ”pocket cybersecurity” field with the devices you are carrying.

Additionally, the best summertime vacation spots, especially if you are into partying and drinking, are usually not known for their safety. Your devices can be stolen, the WiFi can be hacked, and even the hotel can be reporting your location to the authorities if you are deemed to be a person of interest.

But, there are tricks. And, if you protect your device from theft well, use a VPN, and don’t overshare to the beautiful sun-kissed person that is surprisingly interested in what you are doing, you should be fine.

#1 A VPN Allows You to Move, but to Stay in Place as Well

We all know that a VPN allows you to move digitally to any place in the world. This is the primary way a lot of people use virtual private networks to see content from abroad that wouldn’t be available in their location.

But, in the same way, a VPN can allow you to stay in the same place regardless of where your body goes. If you are connected to a server in the US, you will still be able to receive all of the services when traveling to Indonesia as if you are at home.

Public WiFi is usually a mess. A lot of countries, especially those that rely on tourism for income, don’t have strict laws on personal information and cybersecurity.

While this doesn’t mean that every bar you enter will be malicious towards your private information and device, you don’t have the luxury to take that chance.

But, with a VPN hotspot app, you will be able to use the WiFi freely, and all of the information you send through that router will be encrypted and safe.

Hotel WiFi Is Not Your Friend

While a lot of people are aware of the issues of WiFi in bars and cafés, many still think that the connection in your hotel is safe. This creates an opening for those who prey on international tourists. The WiFi you see might be a trap.

If you have a VPN for mobile devices, you should keep it on at all times as the response time from the hotel’s IT department may take by the end of your vacation.

#3 Switch it Up to a Local VPN Server

Especially if you are traveling across the planet, there might be an issue with lag and ping. Also, maybe you want to check out the local content and have access to local online services.

For this reason, you can move your VPN server location to the country you are vacationing in. Having an India VPN server is fast and enjoyable, and you will have all of the same protection you would on any other server.

#4 Save Money on Purchases by Moving

Your IP address shows a lot about your location, and that piece of information reveals a lot about how you live. Even if you think you are lower middle class in the coastal cities of the US – that makes you richer than 95% of the global population.

In turn, online purchases will be more expensive for you than they would be for a guest and customer from some other place. This is why it would be a good idea to look for services from a local server and not from your home location.

Cyberjacking and digital pickpocketing have become increasingly prevalent in modern times. Someone can bump into you and steal all of the data from your device, especially financial data.

But, if you have a VPN, the connection will be scrambled for them. Also, you might invest in a case or wallet that would prevent such an attack.

Even if there were monsters out there, it wouldn’t prevent us from taking that vacation after two years. But, we should mitigate all of the risks as much as it doesn’t prevent our relaxation and fun.

Thankfully, using premium providers like Le VPN is easy, convenient, and relatively inexpensive, especially considering what you will be protecting. Then, you can have fun.