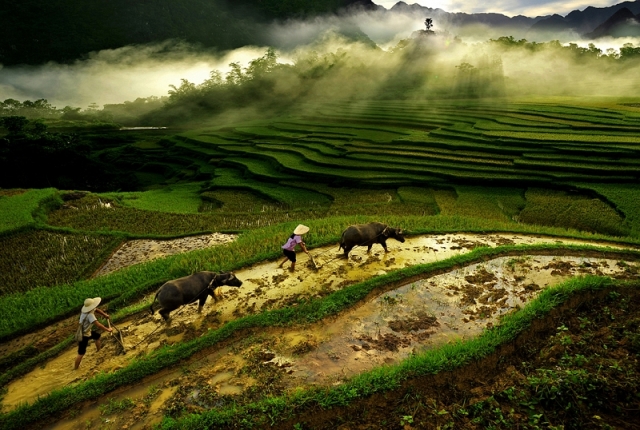 Vietnam, the 2nd prison in the world, after China, for bloggers and cyber-dissidents

In Vietnam, bloggers and cyber-dissidents contribute to bring alternative information which is independent of the government. They can talk about topics that are forbidden for the regime, such as corruption, environmental issues, political prospects, etc… Unfortunately, the number of bloggers, netizens and journalists being arrested for the freedom of speech has risen for the last successive years. Seeing the Arab uprisings, the Vietnamese authorities have increased their repression to silence dissenting voices.
Among the 35 cyber-dissidents imprisoned up to date are the human rights activist Dieu Cay, the lawyer Le Quoc Quan, the bloggers Paulus Lê Sound, Ta Phong Tan, Tran Huynh Duy Thuc and Trung. They were sentenced to such terms of imprisonment due to “subversion”, “propaganda against the state”, “attempting to overthrow the government” …

The pressure on bloggers and other cyber-dissidents is growing so to prevent any destabilization of the regime.
On May 23rd, five bloggers, Ho Duc Hoa, Paulus Le Van Son, Nguyen Van Duyet, Thai Van Dung Tran Minh Nhat, were convicted at first instance to 4-13 years in prison. Two of them saw their sentences reduced, while the verdict of the Court has been confirmed for the other three. They were accused of having links with Viet Tan, the banned Democratic Party of Vietnam’s territory which is now based in the United States, and is considered as a “terrorist party” by the authorities.
On June 15th, the blogger Dinh Nhat Uy was arrested and accused of having “posted photos and articles on his personal blog, undermining the prestige of the government organizations.” He shall remain in prison for the three month period of the investigation is concerned for “abusing democratic freedoms against the interests of the state.” Dinh Nhat Uy is actually the elder brother of blogger Nguyen Dinh Kha, held since October, 2012, who was sentenced on May 16 to eight years in prison followed by three years of house arrest by the Long An court.

On June 17th, a doctor called Pham Hong Son was sentenced to thirteen years in prison by a court in Hanoi. He is formally accused of espionage and of having “translated and sent by e-mail some documents which are Communist anti-party and anti-Vietnam” to “sponsor a smear campaign against the government” according to some information collected by the Committee to Protect Journalists ( CPJ), an American organization fighting for the freedom of expression.

As mentioned by the CPJ, in the past 18 months, the regime has tightened its control on web content. This is also what was noticed by the French group Reporters Without Borders (RSF), which has just launched an internet petition to support the Vietnamese imprisoned web dissidents.

“Arrests of dissidents, blocking access to sites ” culturally or politically incorrect “, check email, etc.. (…) The Vietnamese government seems to copy the Chinese web control model, “RSF said in its report about the Enemies of the Internet. It is “one of the most repressive states in the world against ” cyber freedoms”.

If the high rate of connections and communication hinders the Internet growth in the country, the number of people who surf in universities and cafes is growing. But among the leading five countries access suppliers, Vietnam Data Communications (VDC) representing 60% of the total number of Vietnamese users is fully controlled by the Vietnamese regime …

To avoid Internet censorship, use a VPN in Vietnam or connect to any other country, as Le VPN allows you to choose your computer’s or device’s location as you wish. Whether you are resident in France or elsewhere, you can choose to base your connection in one of the 100+ countries where access is not restricted. You can then access the sites of your choice anonymously, without incurring any censorship or its reprisals. Choose today a VPN service and enjoy Le VPN Premium offer to surf safely.