A summit on cyber-security soon to be held between U.S. and China? 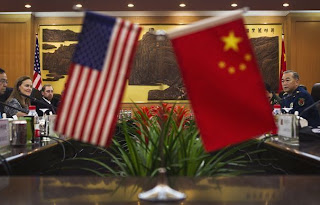 We heard that a summit on cyber-security soon to be held between U.S. and China. For several years, the United States and China have been accusing each other of launching cyber-attacks on IT companies, both private and public ones. Tom Donilon, the national security adviser of Barack Obama recently stated that Beijing should “take serious steps to investigate these activities and end them.”

The White House is even talking of “targeted and sophisticated thefts of trade secrets on a very large scale via computer intrusions coming from China.”

But China which has so far reacted on a defensive mode and merely maintained it was innocent is now switching to a communication offensive mode: China does accuses the U.S. of being responsible for thousands of attacks against Chinese Ministry of Defense website.

According to official media, the Americans are the cause of more than 50% of cyber-attacks against China. When it comes to cyber security on the Internet, the victims are often the instigators; there are no good and bad students, but experts in cyber-espionage and cyber-crime on both sides. The United States are also believed to be behind Stuxnet, a highly sophisticated virus that attacked some Iranian nuclear facilities. As suggested by an expert on the topic, everyone spies the other world!

China now wants to discuss the topic of cyber-security with the United States, as it was announced on March 15th by the spokesman of Chinese Ministry of Foreign Affairs Hua Chunying, during a press conference. “China resolutely opposes any form of hacking and is ready to communicate in a constructive mode with the United States concerning the cyberspace safety” said Ms. Hua, shortly after Chinese President Xi Jinping and U.S. President Barack Obama have talked over the phone.

To keep your Internet browsing safe from prying eyes, choose a VPN. This will ensure that your online activity stays anonymously and safely.

Simply select a VPN server in one of 100+ countries available to protect all your Internet activities, through a secure VPN virtual tunnel, including an extremely strong military-style encryption. Your IP address will automatically be replaced by an anonymous IP address in the country you have selected. You can surf the Internet freely, away from hackers and eavesdroppers willing to listen in or obtain sensitive information.