Facebook : latest statistics on social media in China, Facebook behind Google+ in China market. An independent research group GlobalWebIndex have recently published a report on the social media usage in China. They have conducted an online survey in Mandarin language used by Mainland China, and asked the following question: “On which of the following services have you used or contributed last month?” 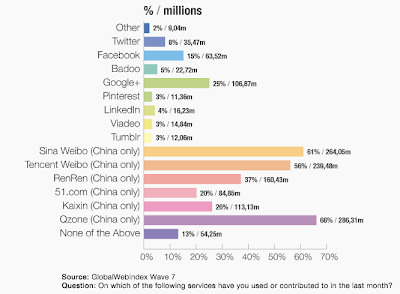 This research has also shown that Google+ is much more popular in China than Facebook, with 25% of Chinese on Google+ (or over 106 million people) compared to 15% on Facebook. That is a big win for Google in the social media space in China.The question is, of course, how do Chinese access the social media like Facebook, Google+ and Twitter from Mainland China? The “Great Firewall” obviously blocks all the “unauthorized” social media websites, making them inaccessible.

Chinese Internet users have learned long ago what is a virtual private network (VPN). All of them are using VPN services, like Le VPN, that change their real IP location to the location of a different country, and allow them to access online content authorized in Europe or in the US, including to access Facebook from China.