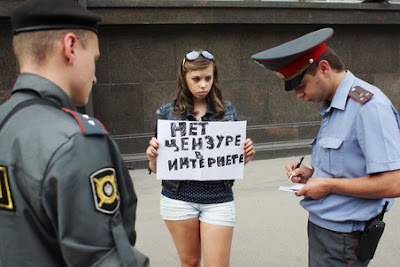 Russia passes Internet censorship law targeting opposition bloggers, journalists and other activists. Yesterday on November 1st Russia passed a new controversial Internet bill for blacklisting websites that Russian government determines have content unauthorized on the territory of Russian Federation.
This new Russian Internet censorship law includes first of all websites on child porn, suicide instructions and drugs, but is also said to particularly target Russian opposition bloggers and journalists, especially in the North Caucasus.
With this new internet censorship law in Russia that took effect yesterday, the authorities can now close down any website by classifying its content as “extremist”.  The Federal Supervisory Agency was given the responsibility to monitor all websites, and has launched yesterday their own website where any Internet user may submit a request for closing down any website that he/she deems inappropriate for Russian Internet users.
In the first 24 hours of work of the Russian Federal Supervisory Agency over 5000 requests for closing websites came from Russian Internet users, which exceeded their planned average volume of work per month (expected volume of requests per month was 3500 to 4000). In the press release of today, the Agency reported that all 5000 requests were reviewed and 10 websites are now black-listed. 190 other requests are currently in development, but everything else was reviewed and declined.
“This law can be seen as one of the elements that can, if the need arises, curb freedom of speech,” says information rights expert Ilya Rassolov.

The law is the latest in a raft of restrictive bills pushed through parliament in recent months, including legislation that dramatically hikes fines on protesters, made libel a criminal offense, and forced foreign-funded nongovernmental organizations to register as “foreign agents”, as evaluated by Forbes magazine.

The view of Reporters Without Borders on the situation of freedom of speech in Russia is not very optimistic: “The Russian state is characterized by a lack of political pluralism and widespread corruption. In a country where respect for human rights is far from given, state control of the broadcast media, arbitrary use of an anti-extremism law and, above all, impunity for acts of violence against journalists, especially in the North Caucasus, are the main media freedom violations. The Internet, a space where independent voices still find expression, is now being targeted by the authorities, who are trying to develop online filtering and surveillance. Bloggers are the victims of lawsuits and prosecutions, often under the “anti-extremism” law, which was amended in July 2007.”
A VPN connection is definitely a solution to by-pass this internet censorship. Stay tuned for more news from Le VPN as we are getting to launch a special VPN offer for Russian internet users in the coming days.