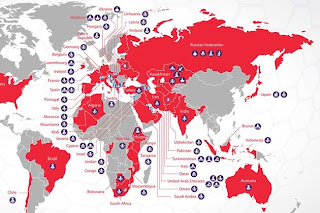 The existence of a malicious program called “Red October”, a vigorous virus with an unprecedented spread was revealed by Kaspersky Lab on January 14th: this virus has infiltrated computer networks from diplomatic, governmental and scientific organizations in Central Asia, Europe and North America where it managed to collect various data and sensitive information. Thus, more than 60 countries, including France, Switzerland, Germany, the United States, Australia and the United Arab Emirates …. have been affected by this virus, which began to spread five years ago and is supposed to be still active.

The operation seems to be designed to gather classified information and geopolitical sensitive data, through abusing hundreds of victims, via targeted phishing also called “spearphishing.” Red October is a dangerous malware.

Besides traditional attacks to desktop computers, this smart virus is indeed able to steal data on smartphones, USB keys (including deleted documents from these keys), email databases, and local FTP servers, says Kaspersky. One of the modules of the system of red october even allows cybercriminals to infect a machine again if another of their modules is detected and destroyed by a virus.

It is thought to have been set up by an international organization: “in recent months, we have identified hundreds of infections worldwide,” the researchers said Kaspersky. Thirty-five of them were recorded in Russia and twenty-one in Kazakhstan. For Kasperky Lab, Chinese hackers may be the cause of the exploitation of the vulnerability and malware my have been developed by Russian-speaking hackers.

This reminds us on how important it is to protect one’s IT equipment (computer, mobile phone and tablet) but also one’s internet connections. The VPN technology allows you to establish an encrypted VPN tunnel to a host (or server) on the Internet. Thus, you can surf anonymously, without restriction, as it is impossible for others to intercept your traffic through our VPN server. Your Internet activity is undetectable!

Le VPN has several servers located in different places and that you can connect easily. These servers allow you to hide your IP address and other personal information to stay secret, regardless of how you’re connected (open public Wi-Fi, cyber cafes …).