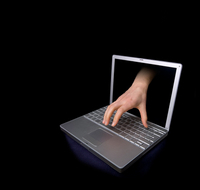 Identity theft has always been a concern, but it becomes even a bigger risk today, as many details of our private lives are openly accessible on the Internet. This makes it easier for hackers to steal someone’s identity — which can be worth thousands of dollars and can give many nightmares to those who have been deprived of their online identity.

You may have heard of those people, among whom also some celebrities, whose name has been stolen on Facebook: they have had their e-reputation trashed by some eavesdroppers who have been illegally misusing it. And it could take ages before you manage to prove this identity theft and be able to make it end.

Indeed, we can make it harder for these more and more tech savvy cybercriminals, by just having a simple protective attitude.

Be sure you create strong passwords: make your passwords to be long with special character and don’t use the same accounts for multiple access. Also don’t hesitate to renew your passwords often.

Besides, as mentioned by NextAdvisor, 62% of U.S. smartphone owners do not protect their devices with a lockscreen password. Without it, whoever finds your iPhone or Android device might be able to access to all your private data on Facebook, Gmail or even bank account. So don’t store any sensitive information, such as your online banking passwords on your phone.

It is also important to be careful with what you share. Realize with whom you can share specific private information and pictures. Remember that someone’s e-reputation can be long to restore… Also some online services require you to provide personal details to reset passwords. Criminals can use this password reset method to convince the website that it is actually you requesting for it and be able to get into your account.

The most secure option remains to get a VPN service: for a few dollars per month, you will ensure your data remains private and your computer and mobile devices secure. Through its technology, a VPN allows you to establish an encrypted VPN tunnel to a host (or server) on the Internet. You can surf anonymously and without restriction: it is impossible for others to intercept your traffic because of the VPN server. This makes your Internet activity impossible to be spotted. After activating a VPN, your IP address is automatically replaced by an anonymous IP address in the country where your server is based.