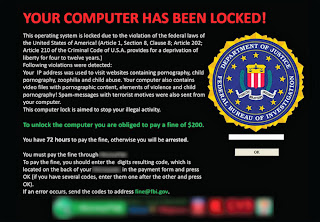 According to a report by Symantec, 556 million people have been a victim of threats in the form of scams in 2012, all over the world. This represents a cost of € 83 billion and at least 18 victims every second. As of today, experts do consider that at least 100 million of malware exist, among which 95,000 new types are created every day.

The last sort of internet scams (threats) is called ransomware: these are fairly sophisticated virus, developed by networks of cyber criminals based in Eastern Europe to take control of hundreds of individuals’ computer by raising impressive amounts. Through a ingenious procedure, hackers threaten people to extort money through fictitious fines.

This is done through “botnets”, i.e. robots that allow hackers to penetrate into remote computers. Contamination to a new computer occurs via attachments in e-mails, links from social networking sites or pirated content advertising which refers the user to a malicious site that tests the computer vulnerabilities. And once the vulnerability is exploited, the virus is installed. The user sees the screen occupied by an unwanted message such as: “Warning, your computer is locked due to a misdemeanor following the detection of offenses” (then a list of sites that the user has visited shows up) . Then comes the receipt : “to unlock your computer, you must pay 200 € in the next three days. If you do not pay within the specified time, your computer will be confiscated and you will be in court. ” This is an alarming form of threats.

Fines must be paid by electronic transfer or via Western Union so that “the computer is unlocked in the next 24 hours.” Of course, the screen remains frozen once the ransom has been paid, as cybercriminals do not even bother to unlock the computer once they have received the ransom.

This technique discovered in the United States by the FBI is now raging in Europe. The misappropriated funds are laundered in online casinos before being collected on accounts in Russia and Ukraine. Threats are improving.

To avoid becoming a victim of ransomware, be sure to follow these rules

• Do not pay the ransom. If your computer has been the victim of an attack and your screen is “frozen”, a cleaning procedure is proposed by the anto-ransomware site stopransomware.fr

• Be careful with computer updates. To limit computer faults, allow automatic updates of the operating system. This helps especially to protect Internet browsing software or mailboxes

• Regularly back up your most important files. Data saving can be done on a removable hard drive or a USB key

• Alert the authorities. When a computer is infected, police specialists may be requested. You will be well explained about the steps to get rid of virus

The best solution is to use a VPN. Thanks to a VPN service, your IP address is hidden and cannot be identified. When you connect to the Internet via an unsecured connection through the VPN, you get a strong encryption, which will not allow anyone to know what sites you have visited. And your Internet connection is secure wherever you are. A special VPN also allows you to protect your connections from your smartphone or tablet mobile. Think about it, as ransomware on mobile systems is also becoming fashionable.