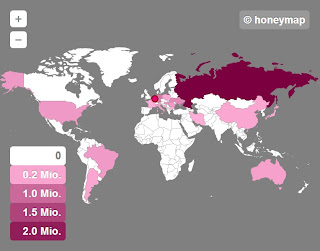 A new free website can now produce a map of the world showing where cyber-attacks are taking place. Deutsche Telekom introduced a website that displays real-time map of the cyber world attacks. This site sicherheitstacho.eu displays a globe showing countries with different colors, depending on the frequency of cyber-attacks. It displays attacks when events occur, with the exact time of the attack, the country of origin and the target.

The free website also offers several other statistics, such as the country rankings and the types of attack.

Thus, Russia ranks as the first country to create attacks, with 2.4 million cyber-attacks for the only month of February 2012. Taiwan ranks second with 900,000 attacks, followed by Germany and Ukraine, with respectively 780,000 and 566,000 attacks. The United States stand on the sixth place, with just over 355,000 attacks that originates from there.

Yet, India being one the key IT countries is not among the top 15 countries creating cyber-attacks. The entire African continent is beyond the list and Israel is the only country in the Middle East.

Deutsche Telekom just reminds us that about 200,000 new forms of cyber viruses appear every day.

To surf safely, the solution is to choose a VPN service. Its technology allows you to establish an encrypted VPN tunnel to a host (or server) on the Internet. You can surf anonymously, without bounders, as it is impossible for others to intercept your traffic due to the VPN server. Your Internet activities are undetectable. The VPN installation takes only a few minutes and costs only a few Dollars per month. It ensures you to surf freely, check your bank accounts or make purchases online safely.