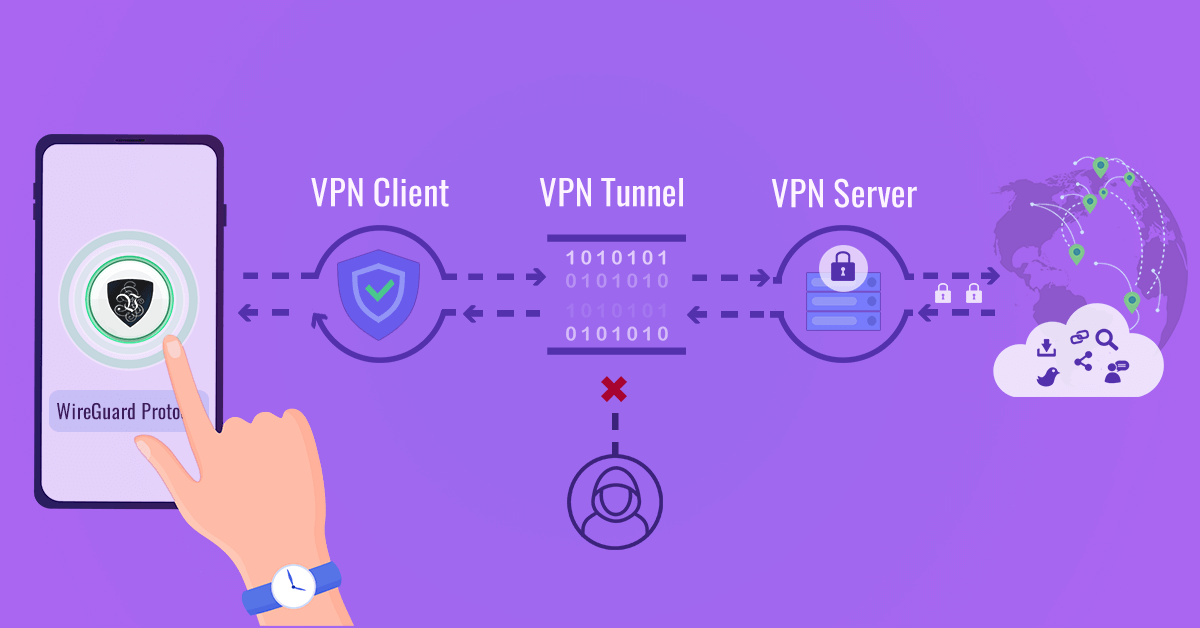 Cybersecurity is always an arms race. Both security experts and engineers, and the hackers, snoopers, and data thieves they are trying to stop working tirelessly every day. WireGuard® is a new multi-faceted protocol and the newest weapon for our digital protection.

That is why Le VPN team is integrating WireGuard in its VPN service and increasing its list of security protocols to a total of six: OpenVPN, L2TP/IPSec, IKEv2, PPTP, IPSec, and now WireGuard.

WireGuard as the new security protocol is:

In the simplest terms, WireGuard offers both speed and security when it comes to cryptography protocols. It uses tested and proven advancements from multiple other types of crypto-protocols, cutting down on bloatware and leaving only protection.

Also, it looks toward the future and some current high-end users. As internet speeds advance, Le VPN predicts that current software might make a bottleneck in VPN speed. Using a much leaner and simple cryptography protocol would increase this bandwidth limit.

Although it sounds as if we are testing faith by calling something unbreakable, this is the closest you can get to the truth. It is impossible to overestimate the importance of security software being lean, fast, and anonymous.

Having your VPN protect your devices with software where redundancies are on the protection and not the coding side is beneficial for many reasons.

WireGuard works by having only a single endpoint, which is the user. Once configured, your device will have an anonymous key that will be registered by the server. Regardless of where you are entering the system, if that key is recognized, the data is encrypted and sent.

But, if there is no authentication between the key and the IP address, the data will be dropped.

This prevents anyone from spoofing your connection and pretending that they are accessing from your device. The server will recognize the discrepancy between the keys and IP addresses and drop the information immediately.

How does Encrypting Work?

The basic rules of encryption are rather simple, and they haven’t changed for thousands of years.

One side uses an established way to scramble a document. At that moment, for anyone but the person having the key, the information looks like nonsense.

But, if you do have a key, the data is reverted to its original form and showed as it should be. The difference is that with computers, this speed can be significantly increased, and the code used to encrypt can be made unsolvable without massive amounts of processing power.

What smart security software like WireGuard does is to decrease the cost of using the product as much as possible for you. And, on the other side, it increases the cost of trying to hack you beyond what a regular hacker, or even a collective, could have.

This contrast is what makes WireGuard so great. Most users won’t even notice that it is enabled, and it will even allow for greater speeds compared to the older solution. But, the other side will see very much.

And, because it is an anonymous P2P connection with crypto key routing, anyone trying to enter your system first has a neigh-impossible task of finding where you are. Even if they know which server you are connecting through, there is no logged data behind that.

Unless you are holding something valued hundreds of millions of dollars, the hacking effort alone wouldn’t be worth the prize on the other end.

This might sound like a minor thing, but it becomes a huge benefit when it comes to cybersecurity. Instead of vast and complex systems of code, WireGuard is relatively simple.

While you might need some technical knowledge to know exactly what you are looking at, such software can be reviewed by a single person. This reduces bugs and inconsistencies very easily.

The fact that the code is narrowed down isn’t only for the benefit of the developer or engineer maintaining it. As the code itself is very compact, there is nothing for hackers and snoopers to focus on.

This is especially important where there are updates on either the security protocol or the system. Even a single thread left loose is something those that want to harm your computer can pull on.

This protocol is faster from both the CPU standpoint and possible bandwidth.

Because it is so small, it doesn’t encumber even older devices, making it ideal for tech used in IoT. The small size and streamlined design also reduce lag and any type of glitches.

Finally, because it is faster on all fronts, it will allow for greater speeds, only taking a bit from your ISP provided internet speed.

Similar to how a VPN would protect your system simply on the basis that you are anonymous, using WireGuard is more secure because there is very little data logged.

Because you are using an anonymous key to decrypt the information, it is impossible for someone to trace back the received packets to your device. And as it can roam through different IP addresses and is adaptable to a VPN, the only possible point of entry becomes your physical device or home router.

We provide all of our users with 5 different cryptographic IDs. Each of these IDs are independent and can be used to connect to any Le VPN server from any device.

Installed on different devices, these IDs make them cryptographically unique. If one of the devices is compromised, the others will remain protected.

Want even more security? You can generate your own WireGuard keys and provide us with only the public key, keeping your private key secret from anyone.

Want to rotate your IDs once in a while? We can easily regenerate them on your request.

We apply zero trust principles to all of our servers and strive to use the least information possible in VPN servers’ memory and hard drives.

We don’t keep any logs on our VPN servers, however, WireGuard server keeps previously established handshakes to facilitate further connections.

These handshakes may contain some of the user’s information, such as public key and IP address.

That is why we have added an extra protection by clearing all handshakes that are idle for a certain period of time.  This measure will make sure no traces of your connections are left on servers’ memory.

In the cybersecurity arms race, there is no time to lie on your laurels, and that is why Le VPN is adding WireGuard to its list of protocols. This new encryption protocol is faster, easier to use, and takes up less space.

With such innovation, your devices will be safer and operate faster. No Compromise.

WireGuard® is a registered trademark of Jason A. Donenfeld.